During an event it’s important for the event staff and volunteers to be allowed to focus on the specific tasks related to their position without getting overwhelmed or having an additional aspect get overlooked. In an effort to increase their reach and allow the tournament team to focus on managing the event, the Big Rock Blue Marlin  Fishing Tournament entrusted their social media marketing to Bellagurl. With our social media management and large scale event experience, Bellagurl was able to expand the Big Rock Tournament’s social media presence while attracting a wider audience and increasing the tournament’s fans by the thousands!

Bellagurl managed the Big Rock’s social media leading up to and throughout the week of the tournament. M
aking sure that social media posts correlated with the tournament’s marketing plan, we planned posts about sponsors, giveaways, contests and up-to-the-minute catch and release information. We were able to reach the substantial fan growth through the implementation of creative campaigns, such as “Hump Day Hook-Ups,” 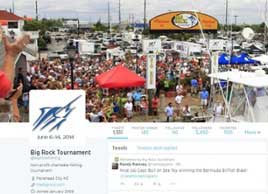 revamping their email marketing campaign with a fresh new look and engaging content, and the creation of an Instagram account to connect with a visual audience. Instagram videos of each weigh-in were uploaded for fans to relive all the fishing excitement, and the crowd was encouraged to use a specially-created hashtag to share their personal photos. Bellagurl also handled all questions and comments that came through the social media platforms; Facebook alone had 255 questions throughout the tournament week.

With the help of Bellagurl, the Big Rock Blue Marlin tournament was able to grow their Facebook by over 8,000 likes in 111 days. We grew Big Rock’s Twitter following from 3,301 to 5,454, and their Instagram following from 0 to 2,656. This incredible audience growth made the 2014 Big Rock

the most successful tournament to date, allowing for charity donations such as the 3-story pirate ship for Boy Scouts and children all over Eastern North Carolina at Camp Sam Hatcher.

If you’re interested in jumpstarting your business’ social media profiles, learn more on our website and see many other Bellagurl success stories here.

Ready to find out more?